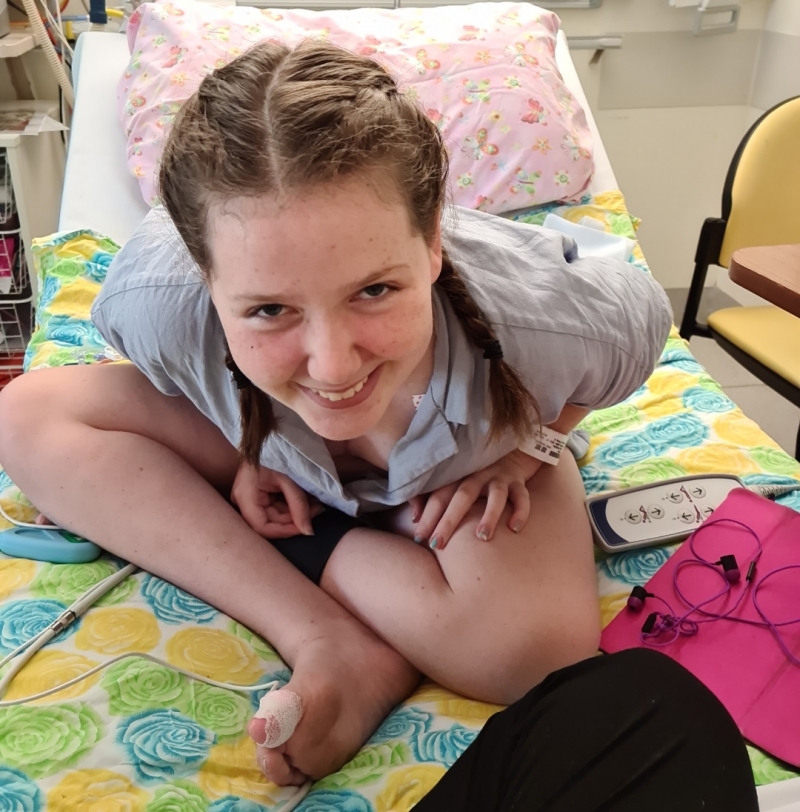 When Tahlia Cady of Koonawarra was born in March of 2009 she required immediate breathing support, and at only 6 days of age she was diagnosed with dilated cardiomyopathy, mitral valve regurgitation, ASD and VSD holes, meaning her left ventricle is enlarged and doesn’t function properly. Mitral valve regurgitation — also called mitral regurgitation, mitral insufficiency or mitral incompetence — is a condition in which your heart’s mitral valve doesn’t close tightly, allowing blood to flow backward in your heart. Tahlia immediately started on anti-failure medications, then stabilised and was discharged after 3 months with a Nasogastric tube for 12months.

Tahlia’s mother Jennifer was originally told that Tahlia would never make it out of the intensive care unit when first diagnosed her heart was inoperable. Tahlia required weekly check-ups as a baby in Sydney but as time went on Doctors were happy with her communication, and heart stability, reducing her check-ups from weekly to every six months.

Over the next few years of Tahlia’s life, unless something happened to amplify her condition such as tonsillitis or other virus’s, she was a “normal but sick hearted child” “With heart kids it’s hard to see that they are terminally ill. She has struggles with fitness and fatigue but She would

In January 2021 Tahlia underwent a heart echo check at Westmead Children’s Hospital. “Doctors noticed on the echo she had a bit of fluid on chest admitted her for diuretic flush, she got up to go to toilet the next morning and she started to feel sick and crashed, I went from one nurse in her room to her whole room full of intensive care unit Doctors and specialists. She was in a cardiac cardiogenic shock and her heart was failing fast. At one stage she only had enough blood pressure to support a newborn baby. They couldn’t stabilise her on ward so transferred for intubation. Even while being intubated she was demanding a drink and telling the doctor he had lied to her, and said he just changed his wording around to keep her from getting upset with what was happening about the intubation” said mother Jennifer.

Surgeons looked studied her echo tests to see if surgery or a complex transplant was the option. “They operated they shaved the left atrium, replaced the valve, her left lung wasn’t working due to being squashed due to heart size and still isn’t working 100% still. The surgeon said she had never operated on heart as big as Tahlia”. Said mother Jennifer

Next was 14 days in ICU, followed by 22 hours on ward, the back to ICU due to a heart rhythm disorder called non sustainable vt, ventricle tachycardia the lower chambers beat very quickly. Specialists decided that Tahlia would need an operation to insert an ICD (An implantable cardioverter-defibrillator) An ICD is a small battery-powered device placed in your chest to monitor your heart rhythm and shock and pace if needed. “Post operation she has so many more restrictions and precautions due to this device. Her heart isn’t fixed it is supported and helped by 3 different types of anti-failure medications and few other medications. She was admitted for 40 days in total”. Said Jennifer

On top of the issues with Tahlia’s heart she was then diagnosed with Chiari malformation in April 2020, and needed an emergency brain operation during peak times of covid-19 and spent over 2 weeks in Randwick Hospital.

After her Chiari operation the family went into hospital early for a check-up as stress on Tahlia’s heart could make it worse. Tahlia has always been on anti-failure medication and diuretics taking up to 12 tablets a day at different times, increasing doses as she grew to keep her stable “They told me Tahlia was at maximum doses last November. She was on adult doses of medication and they couldn’t increase it for a while. Unfortunately she wasn’t coping on that dose to keep her stable and her body’s way of showing that was the cough which is a one of the first signs of heart failure. She was slightly grey in colour, and when she did the exercise test that Thursday, her oxygen level was really low,” Said mother Jennifer. She is now on more and different anti-failure medications to try and stabilise the heart function and the arrhythmias that started after the
mechanical valve replacement. Tahlia’s function is very low but it’s at a sustainable /stable level which just keeps her off the list for transplant but they have warned me transplant maybe needed one day in future.

Tahlia is year 7 at Dapto high and hasn’t been able to commence due to her medical complications.Tahlia’s brother Kaleb is 13 and due to covid restrictions siblings weren’t allowed in hospital. Luckily for Jennifer she also has an older son and his partner who are 21 and they were able to look after Kaleb. “They also become parents themselves during this time so it was busy for them. As a parent you are divided between home and hospital life but as long as the kids at home are supported you are at ease with where you have to be” said mother Jennifer. Single mother Jennifer is a lead swim instructor at northern stars Dapto and also a disability support worker and hasn’t been able to work since Tahlia was admitted to hospital.

“Sydney appointments for Tahlia are all over place. Treatment for her Chiari Malformation is at Randwick with neurosurgeons. Treatment for her heart conditions are at Westmead were she must go to the pacemaker clinic, cardio specialists, eye specialists due to medication, neurologist, and orthopaedics. Locally she has bloods tests monitored twice weekly at Dapto due to warfarin levels which will hopefully be able to be undertaken at home when her levels stabilise. She also has paediatrician’s appointments in Wollongong which include sleep apnoea and her heart pead,

physiotherapy 3 times week as well. Appointments vary and it seems we can never get all appointments on same day in Sydney.”

An application for support was made to Illawarra Community Foundation, from the funds raised during the i98FM Illawarra Convoy. The application was approved and Tahlia and her family will be supported with $4000 of food vouchers and $4000 of fuel vouchers to help alleviate some of the financial pressures of her ongoing appointments and treatments. “I have been overwhelmed with help from family and friends of mine, things like messages and calls, food drop off at hospital, vouchers these things, friends turned up just to sit with me. The vouchers will take a massive amount of stress of me with travelling to appointments, with bills, medications and the supported machine equipment she needs. I will be able to pay for these without worrying about essential everyday needs. The community support has just blown me away and I’m grateful that this pressure has been taken off me by people I don’t no THANK YOU IS NEVER ENOUGH” said mother Jennifer.