This morning the Illawarra Community Foundation has granted local family the Widodo’s $2,000 worth of fuel vouchers to help cover costs for a family holiday around Australia, making them the first individual beneficiaries of the foundation.

In 2013, husband and father Catur Widodo from Kembla Heights, was diagnosed with a large tumour in his abdomen which turned out to be Pseudomyxoma Peritonei (appendix cancer). He underwent surgery resulting in his spleen, gallbladder and two-thirds of his large bowel being removed. A three-month stay in hospital was followed by six months of chemotherapy and then in April 2015, a routine hospital visit revealed the devastating news that the cancer had returned…aggressively. Doctors gave the family the distressing prognosis that Catur had less than 6 months to live.

As a last resort, the family raised funds for him to visit his homeland of Bali to explore some alternative therapies for his condition, which unfortunately proved unsuccessful.

“With Catur’s condition being diagnosed as terminal, it’s been very difficult to come to grips with this for both me, and our two children who are aged 5 and 11” says his wife Sarah Widido. “We decided we wanted to try and make his last few months more enjoyable, and take him on a trip around Australia while he is still with us”.

Last year, the family purchased a 25 seater mini bus for their holiday, which they have named ‘The Love Bus” and have been getting ready to depart on their journey. However after spending thousands of dollars on renovation, mechanical repairs and registration, the family has been struggling to make Catur’s dream a reality.

After submitting an application to the Illawarra Community Foundation, the family will now receive $2,000 in fuel vouchers to help reduce the financial burden of their trip. Catur and his family will leave Wollongong in March, and will travel for as long as Catur’s condition permits. “We are happy to provide Catur and his family some financial support in the way of fuel vouchers, to help make his last few months as enjoyable as they can be” said i98FM Breakfast Show host Marty Haynes. “This trip will provide Sarah, Kyan and Jala some life-long memories of their beloved Catur, and we hope that our donation has helped the Widodo family to focus on the one thing that matters at this time, which is each other”.

“Cancer is just a word,” says Sarah. “It doesn't have to be our reality. This is a love story about living with cancer, not surrendering. It’s about making every moment count.” 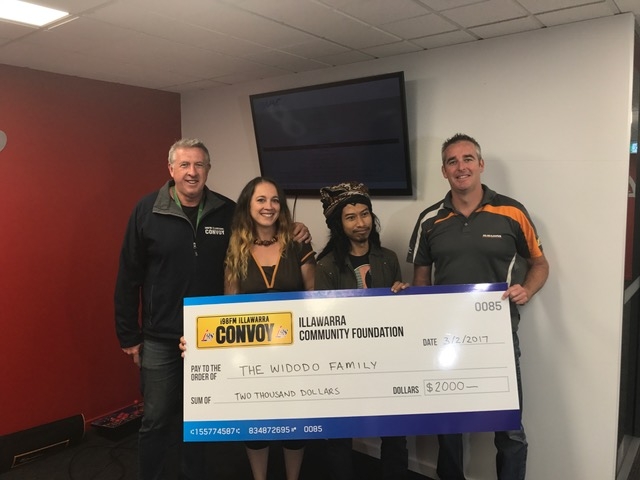