Viena Woodstone from Kiama loves to dance! However, unlike most children her age, her dream of dancing is much more difficult due to her complex medical issues. 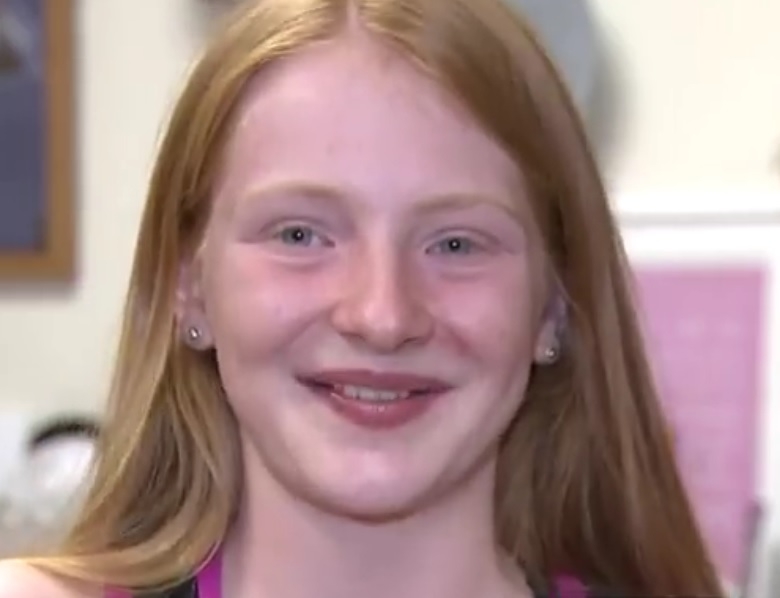 Viena Woodstone is a 13 year old from Kiama who is full of hope for her future, she adores her family and friends and loves to dance! However, unlike most children her age, her dream of dancing is much moredifficult due to her complex medical issues. Despite her challenges, she is a testament to how dancing and happiness can help heal trauma.

Viena was 27 days old when her parents realised something was seriously wrong. “I had noticed her left eye twitching from about 5 days old, but the ECN said she was far too healthy for it to be anything serious. It wasn’t until the nurse saw it herself, we were sent straight to the GP, who sent us to the local hospital, and by that afternoon we were taken by ambulance to Randwick Children’s hospital where we stayed for almost 2 months,” said mother Beth. Within a few days Viena had an MRI, CT scan, brain ultrasound and electroencephalogram’s (EEG’s). These tests revealed that Viena’s eye twitching was actually hemi-facial seizures and they were occurring every 2 minutes. The seizures were cause by a tumour in her cerebellum, which is wrapped around her brain stem, near the parts of her brain that control her breathing and heartbeat. She was trialled on 4 different anti-epileptic medications but none had a positive impact. Eventually Viena was sent home and monitored with her parents being advised she was unlikely to survive past 12 months.

“When Viena was two we were offered surgery, but the risks were very high and we chose not to risk it,” said Beth. Despite the bleak prognosis, Viena thrived, meeting and exceeding all her early milestones. Until she was 6 years of age, she had two rounds of cerebellum brain surgery at Melbourne Children’s Hospital. Over the long term, the surgeries have made a positive impact in Viena’s life. Her seizures are now far milder and less frequent and she leads a pretty normal life. But for the 12-24 months post-surgery, Viena experienced significant negative side effects, the two most significant being very erratic heart rate and PTSD.

To date Viena has had 10 MRI’s, dozens of EEG’s, 4 Sleep studies, SPECT scans, she’s been under general anaesthetic 12 times, she’s had 2 major brain surgeries lasting 11 and 14 hours each and needed oxygen for months on end. Viena has unsuccessfully trialled 6 different anti-epileptic medications.

Today, Viena continues to have seizures but they have become milder and less frequent. She has annual neurological consults and an MRI at Randwick at a minimum. “Last year she had a month long cardiac monitor. She has seen a wonderful psychologist regularly for the past 4 years, who is a major support to the whole family. We have no real prognosis as her condition is very rare. Epileptic conditions often become more complicated as children reach adolescence, but so far, Viena is coping far better than her doctors have expected,” said Bethamie.

Viena has spent extended periods of time in hospital over the years. This was most significant when she born and at the time of her surgeries when she spent most of the year in and out of hospitals. “I would stay with Viena in hospital and Coop would stay with our other kids, who were only 3 and 1, and try to keep our small business afloat. Separating the family impacted everyone, There have been periods of enormous stress and fear for all of us, especially around her surgeries. Viena suffered acute anxiety as a result of her medicalisation and we have been working on this for many years with a child psychologist, her little sister Neve, who was only 3 at the time of her surgeries, has also needed support to process her memories and fears.

There has also been a financial impact, particularly impacting how Beth has been able to work. Viena’s surgeries happened at Melbourne’s Children’s Hospital and there were enormous additional expenses involved in moving the whole family to Melbourne, twice, for 6 weeks at a time.

Viena has 3 siblings, and her mother Beth believes her medical challenges has impacted them all, in good and bad ways. “I believe watching Viena’s challenges and strength has made them all more empathetic children and the bond between them is just beautiful, but the long separations due to hospitalization were hard on everyone and had a particularly negative impact on Neve, who didn’t understand why she was being left behind. Our son, Seb was only 10 months old when Viena became critical and he wasn’t able to stay with us in hospital so that separation was very hard. His first sentence was ‘me too’ which he would say when he heard car keys, which he associated with being left behind.”

Sick children often receive beautiful generosity from the hospital in the form of gifts and celebrity visitors and as lovely as this is, it can then be hard on siblings who sometimes feel invisible. Neve has recently started doing singing and guitar lessons, and her confidence and self-esteem is
growing as she finds her uniqueness.

Viena’s oldest sister, her half-sister Jada, lives in Canada, and the financial stress of protracted illness has meant we’ve only been able to bring her over for visits once per year, and we’ve never visited her.

“Viena has always been a medical anomaly. What has always worked best for her is happiness, so that’s what we focus on. It’s the only bit we can control,” said Bethamie. “Viena told me her life’s dream is to dance a solo on stage. Rhythmic dancing also assists with her anxiety, sense of self-worth and brain plasticity.”

Viena has loved dancing since she could stand, and has taken part in dancing classes since she was three, but financial difficulties have meant the family have only been able to afford 1 class per term. Viena will often disappear into her room for hours and practice moves and make up dances. “Dancing has helped a lot with her anxiety and self-confidence. It helps to strengthen her balance and coordination, and when she dances she is be part of a group, like everybody else, which is important to her.”

A submission to cover the cost of dancing lessons for Viena was received by Illawarra Community Foundation, from the funds raised during the i98FM Illawarra Convoy. The request was approved, and when contacting Miss Zoe’s School of Dance to discuss payment of Viena’s classes, the dance school decided to generously cover the cost of the dance lessons, meaning the family will now also receive $5000 worth of food vouchers from The Illawarra Community Foundation to help reduce the financial burden of Viena’s ongoing care.

“We are so grateful to Miss Zoe’s dance school. Miss Zoe’s generosity is allowing Viena to do all the styles she loves in a supportive and inclusive environment. The private lesson is particularly important because it means she’ll get to do a solo, her ‘life’s dream’,” said Beth.

“Miss Zoe’s School of Dance prides itself on making dance accessible to all and we are thrilled to be helping Viena achieve her dream of dancing solo on stage. Viena is a hard-working, kind and gentle student & we cannot wait to see her perform in July at our mid-year concert. Miss Zoe’s is always looking out for ways to support the community that has supported us over the years. Being able to do this for Viena is very special & we are proud to have her & her family as part of the Miss Zoe’s community”, said Zoe McCarthy, owner and director of Miss Zoe’s School of Dance.

Miss Zoe’s is a non-competitive and non-selective dance school where the emphasis is on fun and fitness - everyone is welcome! They have been providing high-quality dance classes in the Illawarra for over 12 years and also opened in 2018 in Kiama. 2019 saw a 3rd studio open in Coledale. In 2018 they were named the Most Outstanding Dance Studio in the Illawarra & South Coast at the Illawarra Local Business Awards and in 2019 were a Finalist in the Australian Small Business Champion Awards. For more information on classes provided by Miss Zoe’s School of Dance visit https://www.misszoesschoolofdance.com/ or contact misszoe@misszoesschoolofdance.com or 0407 921 054

“We are overwhelmed with gratitude for the support that Convoy and the Illawarra Foundation are giving us. Raising kids is a financial struggle for most families, but trying to rebuild after a significant trauma and trying to nurture all of the kid’s dreams is really hard. The support from Convoy will take some pressure off the weekly budget and allow us to focus on the well being and happiness of all the kids “

“We would love to see Viena fulfill her dream of dancing a solo on stage,” said Convoy and Illawarra Community Foundation manager, Mark Rigby. “Thanks to the generosity of Miss Zoe’s School of Dance, this could become a reality for Viena, and we are proud to also support the family with food vouchers to help them with Viena’s ongoing treatment”