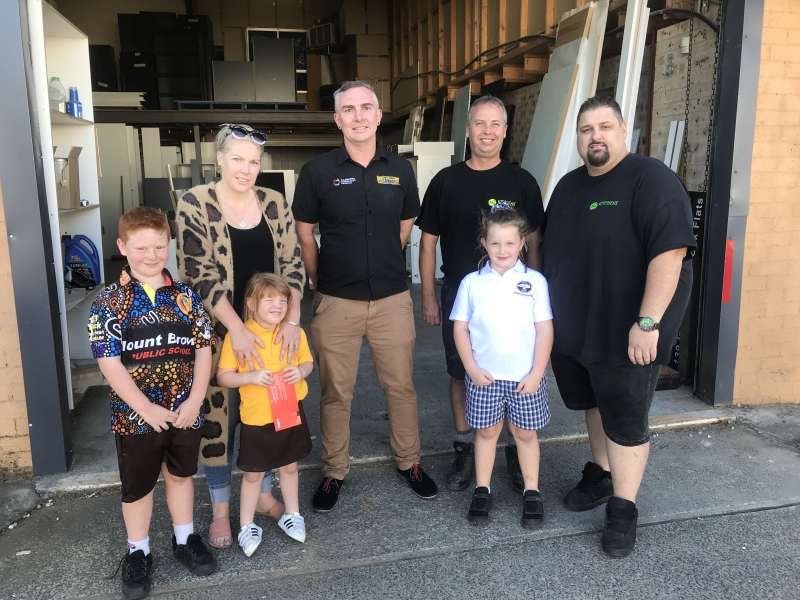 Piper Williams is a 6 year old from Horsley who currently is in kindergarten at Mount Brown Public School. When she was born she had both of her feet deformed and at two weeks of age her eyes appeared to look black and Doctors diagnosed her with Aniridia (born without irises) meaning she had lost sight in her right eye with only 14% vision. Doctors then started testing for genetic abnormalities. Piper has been diagnosed with several complex medical conditions including; Tectal Plate Tumor, Kidney Disfunction, Anaridia, seizures, global developmental delay & speech impairment.

Currently Piper is on numerous medications to try and control her seizures. “Doctors aren’t prepared to start any other forms of treatment until her seizures can be brought back under control and the neurologist is currently unable to perform surgery to stop them as they have now been found to be generalised seizures and not focal so removing pieces of the brain to stop them is not an option.” Says mother Stacey. “She can and has stopped breathing during her seizures. Also where and when she has them is so unpredictable. Last year we found her unconscious in the bottom of the shower after a seizure” The prolonged nature of this seizure and its severity prompted doctors to finally do an M.R.I scan on her brain.

Piper’s seizures are now occurring weekly, making it almost impossible for her mother Stacey to find ongoing work, putting a financial strain on the family. “We were hoping for surgery to be done for the seizures however it now looks like is not possible to help her,” says Stacey. “As for the tumor we are getting a second opinion from a neurosurgeon at Westmead with regards to treatment. It has grown since October slightly but they aren’t prepared at Sydney Children’s Hospital to give us any definitive answers or action plans because they can’t answer for certainty the type of
tumor we are dealing with.”

The uncertainty has the family constantly on edge, having to ensure that someone is always watching Piper. She cannot bath, shower or be around any water without supervision. She suffers from many side effects from the medications, and in particular she is very unsteady at times. “She
spends a lot of time sleeping when she isn’t at school as she tires easily, suffers from headaches and stomach pain,” said Stacey. “I haven’t been able to work as I am on call for her, and we travel to Sydney a lot for appointments.”

Piper has 3 siblings; Hudson (5 years old) Charles (9 years old) Brooklyn (16 years old). The fear of Piper’s ongoing seizures takes its toll on her siblings, particularly her brother Charlie. “Charlie suffers from a lot of anxiety. If she closes her eyes he thinks she is having a seizure or if she doesn’t answer when you call her name and she is out of sight for a second her starts to panic,” Says Stacey.

“He is scared all of the time that she is going to pass away like our daughter Willow did almost 3 years ago and has also had to miss out on school to come to her appointments and some social events due to her illness.”

A submission for support was received by the Illawarra Community Foundation, from funds raised during the i98FM Illawarra Convoy. The request was granted with the family now receiving $5000 in food and fuel vouchers to help them manage the financial stress of Piper’s ongoing treatment and trips to Sydney. “The support changes everything. Not having to stress about having petrol in the car to go to appointments, and most importantly being connected to other families like ours who understand what we are going through and not feeling alone anymore will make a real difference,” says mother Stacey.

The presentation of vouchers was held at A&Z Kitchens, who generously donated a kitchen package valued at $17,500 to Convoy and took part in the lead truck pack for the first time last year. “It makes you feel proud and brings a tear to your eye,” Said Adam Bull from A&Z Kitchens.