Claire Pearson, an 8 year old from Horsley, struggles with high functioning autism and ADHD. Though this is not about her struggles with Autism or ADHD, but her hard time with a rare disease known as PANDAS (Paediatric Autoimmune Neuropyschiatric Disorders Associated with Streptococcal infections).

“I still remember the words she said in late October (“Mummy my throat hurts”) that turned both hers and our family’s world upside down almost overnight” says Mother Penny Pearson. “It was like putting your child to bed one night and waking up to a one that looked like her, but was not the same anymore. Instead now your child is experiencing intense rages, completely stops eating, refuses to leave her room and just sits there in complete darkness. Her condition has also meant she has started attacking both myself and her siblings Evie (aged 4) and Zara (aged 6). “

It took six weeks to get a diagnosis of PANDAS, though in the world of PANDAS that is extremely quick. After a visit to a paediatrician, they were referred to a Professor at Westmead Children’s Hospital. The family expected during their visit to hospital, they would complete a few tests and they would find out weeks or months later what was happening with Claire. Instead the appointment escalated quickly.

“All I remember was the words; emergency situation, severe level of dysfunction, she is too severe to start normal treatment, steroids, ivig, lumbar puncture, bloods and we want her admitted by 10am tomorrow.” Says Mum Penny. “Suddenly two doctors became a full room of doctors as they discussed Claire’s treatment.”

PANDAS is an autoimmune reaction to fighting off an infection. The body attacks the bacteria, but accidentally attacks the brain causing inflammation and attacks the basal ganglia - the part that organises voluntary motor control, procedural learning habits, along with cognitive and emotional functions.

At present Claire’s life consists of hospitals, home and days at school with her best friend Kylah. The days at school are the only thing that brings a smile to her face. The constant trips to hospital for treatment are not only an emotional burden on Claire and the family, but they have also taken a significant financial toll.

Claire’s Mum Penny submitted an application for support to the Illawarra Community Foundation for the proceeds of the 2016 i98FM Illawarra Convoy. The application was approved by the board, and the family will now receive food & fuel vouchers to help relieve some of the financial stress incurred by the constant trips to the hospital for treatment.

“We are happy to support young Claire and her family with their struggle with PANDAS. By relieving some of the financial stress the family are experiencing, it will allow them to concentrate on Claire’s condition and give her all the support she needs.” says Mark Rigby i98FM Illawarra Convoy Manager.

Helping present the funding to the pearson family was Marty Haynes from i98FM & Scott Lacey from Soilco. Soilco generously donated $17,000 to the 2016 i98FM Illawarra Convoy. 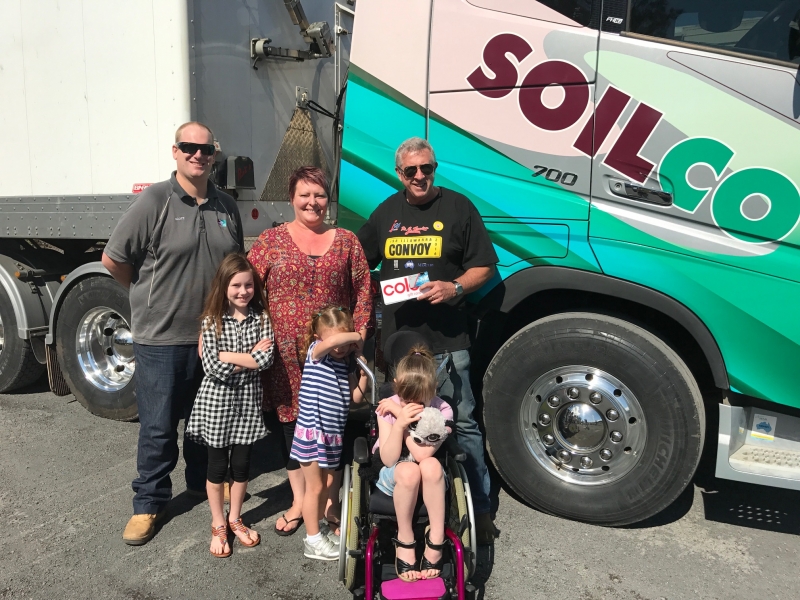