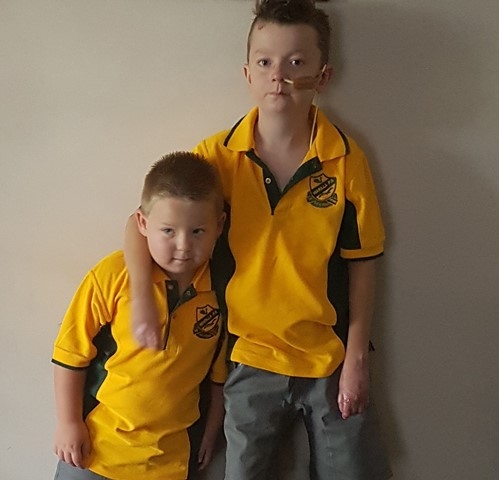 Billy O’Brien, a 12 year old from Warilla suffers from a rare disease called recessive epidermolysis bullosa. He attends a normal public school and has a full time aid to assist him with his dressings, writing, eating, and toileting. Billy misses a lot of school time due to his illness. He fails to gain weight and recently has had to have a nasal gastric feeding tube to assist his calorie intake. This is due to be replaced soon with a peg in his stomach before he commences high school in 2018.

Bill’s condition means numerous trips to Sydney for treatment from specialists, which puts significant financial pressure on the family unit. He has had several operations to remove some of his teeth as his mouth is just too small for new teeth to develop properly.

Billy’s condition requires the temperature to be maintained at 18 degrees as his body overheats due to bandages on his skin. He is also required to have bleach baths everyday, which takes 3 hours to complete, and involves lancing new blisters, checking skin infections, and
bandaging him with specialized bandages. With each bleach bath Billy screams in pain. Billy’s condition means he can never play contact sports, which sees him sitting on the sidelines, cheering on his mates, dreaming he could take part.

Unfortunately for the O’Brien family, Billy is not the first child they have had with this condition. Billy’s oldest brother Jayden passed away from the same condition in 2011.

In 2012 the family welcomed a healthy baby boy, Zachary into the world. He did not have the same condition as Billy, but in 2014 he had an ear infection that meant another visit to a specialist in Sydney. This trip revealed that Zachary was diagnosed with a cholestoma in his ear. He had checkups every 2 weeks for four months, getting the all clear. A year and a half later he was set to have his second operation. He went into theatre and the surgeon then advised he had to remove his whole ear canal, and now has a cavity where his ear canal should be. In 2017 he went for a check up only to be told a cholestoma had returned in his good ear, meaning Zachary will now require hearing aids.

“Billy & Zachary have had to overcome a lot of obstacles in their lives so far, and the emotional rollercoaster their family has been on dealing with the passing of Jayden, is hard to imagine” says Mark Rigby, Illawarra Convoy Manager. “This is clearly a family that requires some support from the funds raised during Convoy. We are proud to support the family with food and fuel vouchers and encourage other families struggling due to potentially life threatening medical conditions to apply for support”