i98FM’s Illawarra Convoy is back for its 13th year in 2017! Today, i98FM Breakfast Show hosts and ambassadors of the event, Marty Haynes, Christie Hayes & Ryan Cram launched Convoy at Kiama Blowhole joined by a number of members from the truck and motorbike community along with many of the recipients of funding provided by the Illawarra Community Foundation, from funds raised in last year’s event.

Last year’s Convoy saw 712 trucks and 1020 motorbikes pass through the Illawarra on the 70 kilometre journey from Appin Road to Croome Road in Albion Park Rail. At the end of the day, a total of $1,805,306 was raised - marking the biggest year in the event’s history and taking the grand total to over $9.5 million raised since 2005.

At this morning’s launch, i98FM Illawarra Convoy Manager Mark Rigby said “It’s exciting to once again be approaching Convoy for another year. As always, the event would not be the success it is without the generosity of the community, in particular the truckies and bikers who are at the heart of the Convoy along with our local businesses. We’ve got a massive day planned and look forward to seeing the Illawarra come out in force to support other families who are doing it tough due to life threatening medical conditions.”

Last year, it was announced that the much-loved charity event would be broadening its focus with a greater charitable reach. The establishment of The Illawarra Community Foundation earlier this year allowed funds raised during Convoy to be distributed to a range of groups and individuals via a submissions process. Some of the beneficiaries from last year’s event included Camp Quality, The Leukaemia Foundation, Can Assist Shoalhaven, Illawarra Cancer Carers, South Coast Disabled Surfers Association, Kiama Lions Club Carers Respite Cottage, Port Kembla Public Hospital & Shellharbour Public Hospital.

i98’s Marty Haynes said “It is great to see the funds raised in Convoy benefiting a range of individuals and groups in the Illawarra and South Coast regions. We are lucky to have some amazing organisations in the region supporting people suffering from life threatening medical conditions. Today the i98FM Illawarra Convoy & Illawarra Community Foundation are extremely proud to announce we are supporting stage one of the Wollongong Public Hospital Children’s Ward Redevelopment project with a donation of a quarter of a million dollars.”

“The generous contribution from Illawarra Community Foundation and Convoy will help to bring the first phase of the Children’s Ward redevelopment to life. This funding will enable us to reconfigure the ward to enhance the way we provide services to the more than 3600 patients we see each year. We look forward to building a lasting relationship with Convoy that will greatly benefit the kids and families of the Illawarra,” said Dr Susie Piper, Illawarra Shoalhaven Local Health District Clinical Director Kids and Families.
This year’s i98FM Illawarra Convoy will be held on Sunday, November 19. The Convoy will depart under police escort from the Illawarra Coal’s West Cliff Colliery on Appin Rd at about 8am and follow a route that will take them down Mt Ousley through Warrawong and past Stockland Shellharbour, then onto Croome Road, Albion Park Rail.

The action continues with a free Family Fun Day at the Croome Road Sporting Complex, when the registered motorbikes and trucks begin arriving at around 9am.The Fun Day includes lots of great entertainment, rides and stalls and concludes just after 3pm.
Truck and Motorbike registrations are now open online at the www.illawarraconvoy.com.au website, costing $30 which includes a complimentary Convoy t-shirt. 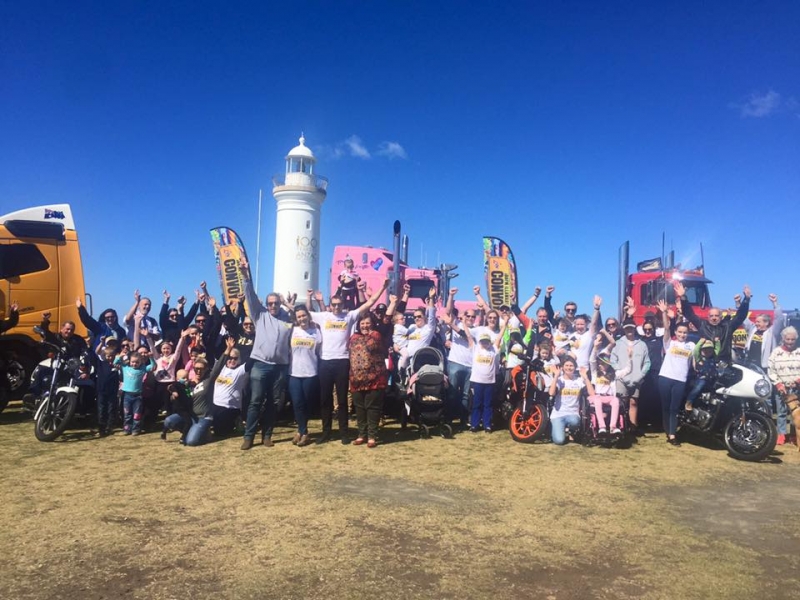