Hugh from Kiama was born on October 17th 2012. While his pregnancy was classified as ‘normal’, (it was a planned c-section), his delivery was somewhat problematic and resulted in him being born in trauma in his own meconium and aspirating. He was also born DCT positive and treated
for jaundice. On his first day he had his first of several apnoea’s and was taken to the special baby care unit. The family left the hospital 7 days after delivery, however Hugh continued to have apnoea spells and was treated at 2 weeks for reflux and aspiration. By 9 weeks old he had his first blue spell and was rushed to emergency where he stayed and his medication was changed from Losec to Nexium to reduce the reflux episodes, aspirations and apnoea’s. It became clear his mother was not going to be able to return to work as Hugh was having multiple apnoea’s a day/night and required a breathing monitor to be fitted to his cot and an apnoea blanket. Following several blue spells during his first few months his paediatrician diagnosed him with sandifer syndrome and Hugh required constant monitoring. All the trauma in the first few weeks and months in addition to the constant monitoring placed enormous extra stress on the family, in particular his mother, Nicole. Hugh’s father is employed with the Royal Australian Navy, and was unable to take prolonged periods of time off work and was away often with Navy travel and deployments. As a result, his mother Nicole cared for Hugh and their three-year-old daughter Isla largely on her own, resulting in extra stress and anxiety on the family.

Although support was given from a local GP it was very limited from other sources and Hugh was treated several times at the Canberra emergency department for apnoea and breathing issues. At 9 months old Hugh was again admitted to Canberra for a blue spell and infection, later diagnosed with pneumonia. Thankfully the on-call specialist noted that Hugh’s persistent apnoea’s and infections required further investigations. He was treated in Canberra for 6 days and then released with a referral to specialists at Sydney Children’s Hospital. As a result of the referrals and test results, Hugh was urgently admitted to Sydney Children’s for 10 days of more studies, scans, tests and treatment. During this stay the results showed Hugh had chronic GERD which had damaged his oesophagus, GI tract and also caused aspiration in his lungs that had resulted in damage to them; this led to a diagnosis of chronic lung disease. During these scopes, they also discovered a rare lung malformation and diverticulum of his right bronchi, he was sent for urgent CT scans with contrast. This news was devastating and extremely stressful for the family.

From August – December 2012 the family attended many appointments and hospital stays in Sydney travelling 100’s kilometres each week, costing hundreds of dollars in fuel/accommodation/parking. Hugh required urgent treatment in those months and the financial burden added enormous to the stress for the family. Hugh’s sister Isla began seeing a child life specialist at Sydney Children’s to help deal with the associated anxiety of Hugh’s treatment. Seeing her baby brother stop breathing and going limp, blue and needing emergency care was extremely hard for her to understand and for the family to explain to her.

In 2013 Hugh’s father was posted to the USA for 3 yrs. With the support of his Sydney’s Children’s specialists Hugh got a fit to fly and as a family joined him. Hugh’s care and treatment was transferred to Johns Hopkins Children’s Hospital in Baltimore, where he received further diagnosis
and considerable treatment. This included major surgery in July 2015 to save and protect his upper & lower GI tract and lungs. This surgery resulted in him requiring nutrition through a g-tube peg placed in his stomach during the surgery; which is still in place now, he still is on a continuous feed regime via a machine for 18hrs a day. Sadly, before Hughie turned two he received a diagnosis of ulcerative colitis, this required quick and substantial treatment, including drug therapy to get control of his painful and chronic symptoms. In 2016, Hugh also survived toxic shock from a severe bacterial infection, this has had a lasting impact on his immunity, his long-term health and care plan. His mother remained his full-time carer in the USA as again Hugh’s father’s role with the Navy meant he could not have time off for any considerable length of time to assist and he travelled substantially during his posting to the USA.

Having returned from the overseas Navy posting earlier this year, the family have spent the past 7 months re-establishing Hugh’s complex medical and care needs. This is a substantial task due to the extensive number of appointments, tests and procedures he is required to undergo. Plus, the added issue of the NDIS implementation and roll out. Sadly, Hugh has also since been diagnosed with focal epilepsy. Post seizure, Hugh is clingy, exhausted and withdrawn. As a result of this diagnosis, Hugh’s neuro team have introduced a new medication to treat his seizures. Hugh has a complex medical background, with a range of diagnosis’. These diagnoses require constant monitoring by the family and an extensive range of health care professionals and specialist including a Pulmonologist, Neurologist, Gastroenterologist, Orthopaedic specialist, Cardiologist, Urologist/Renal
specialist, Ophthalmologist, General Practitioner, Paediatrician, Geneticist, Allergist, Dietitian, Enteral feeding nurses, Social worker, Speech Therapist, Occupational Therapist and Pharmacist.

“Because of the extensive nature of Hugh’s medical conditions, he is in chronic pain and experiences regular and debilitating fatigue,” says mother Nicole. “The side effects of his many malformations are numerous. Daily, one of the main ones is this chronic pain and fatigue. This means he often struggles to walk more than a few meters, requires lifting often, up and down our town house stairs. This is physically taxing on me, as he will request to be carried after short distances and some days has no energy or will to walk.”

“It is extremely hard to imagine the hardship this family has had to endure with Hugh’s complex medical conditions,” says Mark Rigby, Illawarra Convoy Manager. “This is clearly a family that requires some support from the funds raised during Convoy to help with Hugh’s ongoing treatment. We are proud to support the family and encourage other families struggling due to potentially life threatening medical conditions to apply for support” 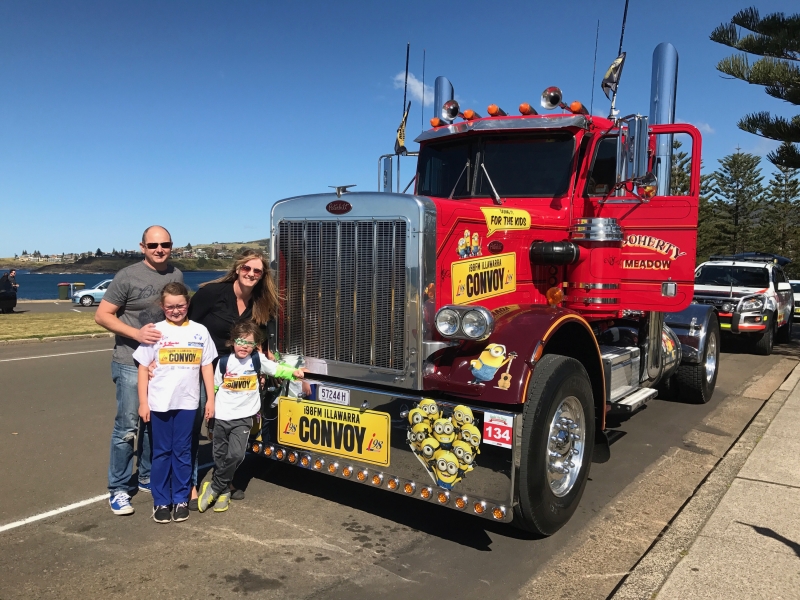