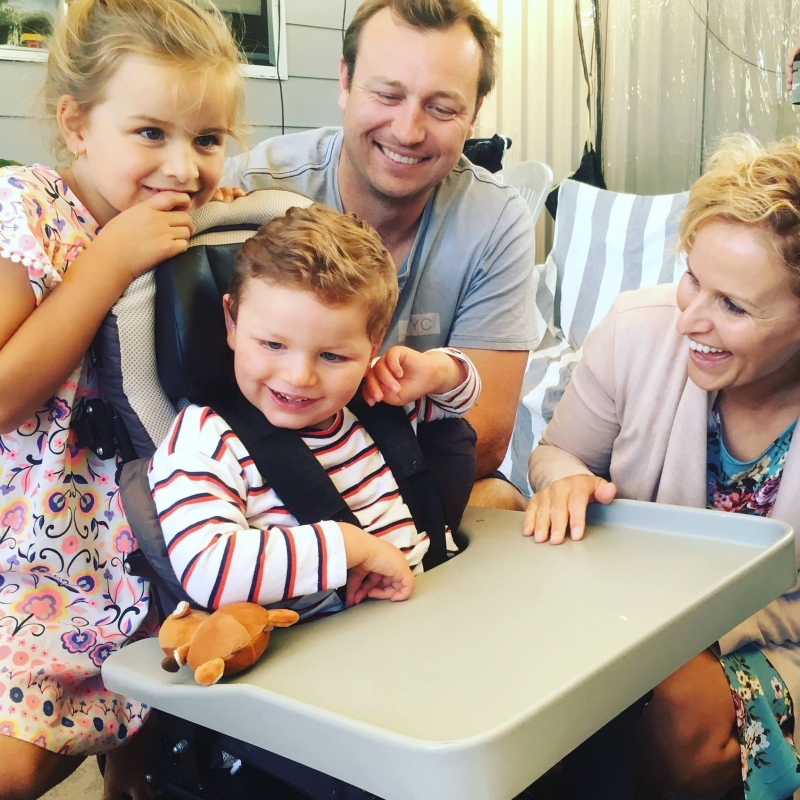 In 2014 Bree Pennie and Mitch Roberts were travelling and working around Australia with their young daughter Dylan. Bree was pregnant with their second child, and in November 2014 in Darwin they welcomed the arrival of their second child Dax, and they couldn’t be happier.

Everything seemed normal until unfortunately for the family a few days after birth Dax failed the newborn hearing screening test. “We weren’t too worried at this stage, as it could have just been some excess fluid,” said Bree. Follow up testing in the following weeks confirmed a unilateral permanent hearing loss. “Obviously this was upsetting news but we were quite optimistic that it really was only a minor hiccup and manageable with intervention. Little did we know this was just the beginning.”

At Dax’s six week check-up, some concerns were raised in regards to Dax’s head circumference growth (or lack thereof). This, with the hearing loss raised some red flags of a Cytomegalovirus (CMV) infection in utero. It also also marked the beginning of more medical issues over a period of 18months. At around 4 months of age, Dax was first diagnosed with Congenital Cytomegalovirus (CMV) and Microcephaly (Small head circumference). Following this and over the next 18 months, Dax was also diagnosed with a cortical brain malformation from CMV, Epilepsy, a cortical vision impairment and Cerebral Palsy (GMFCV).

“Once we realised that there were some health concerns we moved to back to Sydney (Engadine) into to the welcoming arms and homes of our family. For the most part of four years we lived with my parents, and Mitch’s parents,” Said Bree. “Our dream was always to live on the coast once we returned to our home state of NSW; we had holidayed down the coast our whole lives. For a while we didn’t think it was plausible given Dax’s needs. However, over time, we came to understand his needs more. We learnt more about him and how to access services and support. We looked at schools, early intervention organisations and made the decision to move our little family of four to Burrill Lake in October last year,” Said Bree

The move to Burrill Lake allowed Bree to be a stay at home mum and focus on Dax’s treatment and therapies, and to prepare Dax for he commences school in 2020. With Bree not working, husband Mitch still commutes to Port Botany for work. When Mitch travels to Sydney for work he is able to stay with family avoiding the three hour trip from Burrill Lake to Sydney. “He is home at least once a week but it is not uncommon for him to travel back and forth twice a week.” Says Bree

“When we moved, we made the decision that I would not return to work until Dax is in School and my focus would be to give him the best possible start in life by being full time with him and its working. He is crawling and pulling himself up. We have seen a massive shift in his cognitive development and he is a different kid. The house we moved to is more conducive to his needs. We have been able to set our home and his equipment to best enhance his abilities and allow him to thrive”

Dax’s medical conditions currently mean regular trips from Burrill Lake to Nowra & Sydney, whilst the family transitions to available services in the region. “We are already using some local therapist, but unfortunately some particular therapies that Dax has responded extremely well to are not available in this region,” says Bree. Dax attends Occupational Therapy, Physiotherapy, Speech Therapy, Hydrotherapy and Vision Therapy. Most weeks Dax is engaged in formal support at least twice a week and intensive programs in the school holidays. “Informally, we attend kinder gym; we attend playgroups, both in a community environment and a more specialised setting with an early intervention organisation. We meet with his paediatrician and neurologist every six months if all is going well (fingers crossed) and have yearly reviews with a number of other specialists,” Said Bree.

Dax’s formal and informal therapies and treatments come at a cost that is bared by the family. Over the last three years the Dolphin Point Tourist Park ran two small fundraising events for the Roberts Family, raising approximately $2500 which was used to support the family with medical equipment and additional therapy.

An application for support was submitted to the Illawarra Community Foundation from funds raised during the i98FM Illawarra Convoy and the family was granted with $5000 worth of food and fuel vouchers to help ease their financial burden.

“It’s hard to put into words just how much relief we felt after the initial phone call to say we were approved for the family support funding,” said Bree. “In fact, I was in the supermarket and burst into tears. The everyday expenses of running a household do not go away along with the additional costs of having a child with complex medical conditions. We budget but perhaps we have underestimated all the little things that just keep cropping up.”