Some would say having five brothers is enough to deal with when you’re the only daughter in the family, but that’s nothing compared to receiving a Leukaemia diagnosis as a child.

When Grace Barnett was diagnosed with Acute Lymphoblastic Leukaemia at age 13, in 2015 her world was turned upside down. She commenced treatment for her condition immediately and unfortunately with every phase of her treatment other complications arose. From steroid-induced diabetes, to severe neurotoxicity which led to her being wheelchair bound for 10 months, and Vancomycin-resistant enterococci (VRE) which meant she had to be kept away from other cancer patients during her treatment. As if that wasn’t enough, Grace also has Autism Spectrum disorder, which has made things a lot more difficult as she is unable to explain how she feels, doesn’t like to be touched or to follow instructions, which is not a good combination when you have a strict treatment regime.

“When she started losing her hair she was so confused and it was really hard to explain to her why it was happening” said mother Kelly Bonanno. “She kept trying to work out what she had done to make all of this happen and struggles with trying to understand”.

During treatment in Sydney Children’s Hospital, she became friends with Brooke, another young girl with the same cancer diagnosis as her. Unfortunately Brooke lost her battle with cancer in November 2015. “I don’t think Grace fully understood how serious her condition was until Brooke passed away” said Kelly.

Financially it has been difficult for the family, as Kelly is unable to work full time anymore and doesn’t have any extended family nearby to assist her. When Grace was first diagnosed, as she was over 12 years of age, she unfortunately did not fit the criteria for financial support from a range of other cancer charities. “At times we have been close to selling our house, and with Grace’s treatments costs, and feeding a large family, it has been a real struggle.” says Kelly.

Kelly & Grace applied for funding through the Illawarra Community Foundation, with funds raised from the 2016 i98FM Illawarra Convoy available to help those facing life threatening conditions. The application was viewed by the board of directors in February, where it was decided the family met all the criteria for financial assistance. The Bonanno’s have been granted a $500 pharmacy account at their local pharmacy in Warrawong, and $3,500 in food vouchers to help ease the financial burden of their situation.

“Kids like Grace are the reason the community rallies together in such a big way for Convoy every year” says Mark Rigby, i98FM Illawarra Convoy Manager. “Hopefully by providing this financial support to Grace and her family, they can feel some relief in what has been a stressful period in their lives, both emotionally and financially.”

“We encourage any family who has been struggling with a potentially life threatening illness to apply for funding through the Illawarra Community Foundation” says Marty Haynes from i98FM. “Supporting families who are doing it tough, especially where kids are suffering, is the reason we do Convoy every year. Seeing the relief our funding can bring a family like Grace’s is what it’s all about.“ 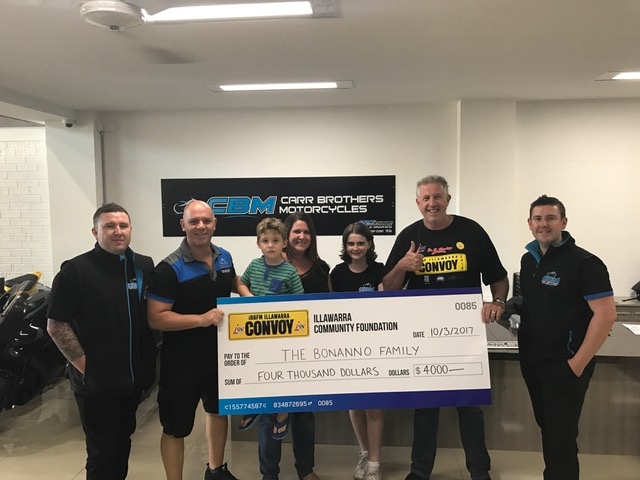