Amarli Broome is coming up to her first birthday in April, and unfortunately has spent most of her young life in Hospital due to her rare and complex medical conditions. 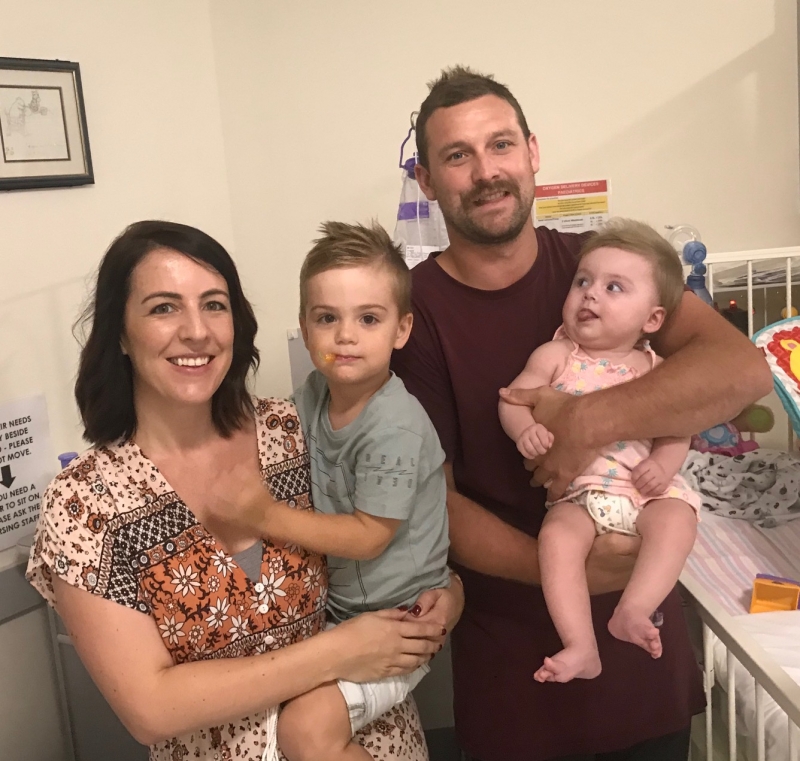 In 2017 Jade and Lee Broome from Dapto fell pregnant with their second child. Jade’s pregnancy was complicated and a constant worry with her 12 week scan initially indicating that Amarli was high risk for Edwards syndrome. A subsequent harmony test then indicated that everything was ok. Doctors requested scans every four weeks due to concerns she was small (IUGR) & Jade was induced at 36 weeks due to Amarli not growing further.

Amarli Broome was born on the 27th of April 2018 at Wollongong Public Hospital. Her delivery was uncomplicated and she was a tiny 2.4kg of perfection. She was taken to the Neonatal Intensive Care Unit about 1/2hr of being born due to some respiratory concerns and low blood sugars, but was back with mother Jade 24 hours later. It seemed like a normal pregnancy for the young couple and they were thrilled to have their second child in their arms.

Two days after her birth their lives changed. Amarli failed her Newborn hearing test (SWISH) and they were referred to Sydney Children’s Hospital. With no history of hearing loss The Broome’s were utterly shocked by the news to follow. Amarli was diagnosed with bilateral Auditory neuropathy, a hearing loss which means she has trouble sending sound to the brain. “We grieved the thought that our little girl will never be able to hear her parents voices, listen to us read her books, or enjoy the sound of music. We were worried for what this would mean for her future ahead, would she be resorted to signing,” says mother Jade.

Amarli underwent a MRI at Sydney Children’s Hospital which found a Delayed Myelination (a condition in which there is a delay in myelin.) The myelin helps with the nerve signalling in the brain. At that point we were told Amarli has Global developmental delay and we are unsure what this will mean for her future. Parents Jade and Lee wondered; will she ever be capable to walk, talk, feed, laugh and interact and all the things they envisioned for their little girl. Amarli also ended up having feeding difficulties and a Nasogastric tube was placed in her nose for feeding.

“On the 29th of September Amarli gave us the fright of our lives. She had a unresponsive episode (I thought I had lost her) and she was taken to Wollongong Hospital. Amarli continued to have these severe breath holding events nightly. We spent 2 weeks in Wollongong hospital before being transferred to Sydney Children’s Hospital. Said mother Jade. “We were terrified at this point and still coming to terms with her disability that I remember very little about those early days in hospital.”

Amarli was seen by numerous teams of Doctors at Sydney Children’s Hospital in aim to find out what was wrong with her. She was seen by Neurologists, Ear Nose & Throat Specialists, Gastroenterologists, a Sleep team, genetics and many more. She underwent numerous investigations and procedures ( x3 MRI, a lumbar puncture, blood tests, & a electroencephalogram).

During this time, The Broome’s spent almost 3 months in Sydney and both Lee and Jade underwent DNA testing for genetics. It has shown that Amarli has a very rare genetic mutation in GRIK 2 gene. This is a rare genetic disorder of which there are only 3 cases found in medical literature worldwide.

Both Lee and Jade are not carriers of this gene & it is unknown what this will mean for her. To make matters worse for the family, during their stay in Sydney Amarli developed seizures and we are still working to control these. She also had a peg tube inserted for feeding. Amarli was finally stable enough for transfer back to Wollongong and was transferred just after Christmas on the 29th of December. She then spent another month in hospital. “We finally got home and had a wonderful 3 weeks at home.” Said mother Jade. “We managed a trip on the train to the Zoo, her first swim in our pool and managed to attend her brothers 3rd birthday before ending back in hospital for her seizures.“

Amarli is currently on a range of anti-epileptic medication, with Doctors trying to find the right one for her to control her seizures. She will have another MRI when she is 2 years old to check the progress of her Myelin. Unfortunately there is no cure and early intervention will be vital for Amarli’s future.

The family travelled back and forward to Sydney Children’s Hospital at least 3 times a week, with one parent looking after Amarli’s brother Bohdi, while the other stayed with Amarli. “We had our rough days but managed to get through them with the support of all the wonderful staff at Sydney Children’s Hospital and our amazing family support network. If it wasn’t for them I don’t know how we would have managed.“ Said mother Jade. “The situation has been very difficult for little Bohdi and I constantly feel guilty that he is missing out on a “normal family life, even though we have strived to keep his routine as normal as possible” This has certainly been bother emotionally and financially draining for the family.

The Broome’s have been coping as best as they can, given the circumstances. “We fear the unknown more than we fear the known. Having a compete diagnosis and some knowledge of Amarli’s future prospects would be easier that the uncertainty I think.” Says Jade “I still feel choked up when I see children of Amarli’s age now who are reaching all their milestones crawling, interacting. I hope Amarli will be able to do the same one day.”

Lee has had to continue working during Amarli’s treatment, but is fortunate he only has to work three days a week. Jade is also due to return to her nursing job at Wollongong hospital in April, but is unsure if she will be able to due to Amarli’s high care needs.

Nursing Unit Manager, Julie Haines, from the Paediatric Unit at Wollongong Hospital, submitted an application for support on the families behalf to Illawarra Community Foundation from the funds raised during the i98FM Illawarra Convoy. The funding committee agreed to support the young family with $2500 Coles vouchers and $2500 Caltex Fuel vouchers to help alleviate some of the financial pressure, and allow them to continue to focus on Amarli’s health and treatment.

“Thanks to all the wonderful Nurses on the Paediatric ward here at Wollongong and to Julie for her request for Convoy support. Little Amarli has spent half of her life in hospital and we are forever grateful for all of the support we have received to date. We honestly would have not survived this without it, “says mother Jade