A heartbreaking loss for a young family 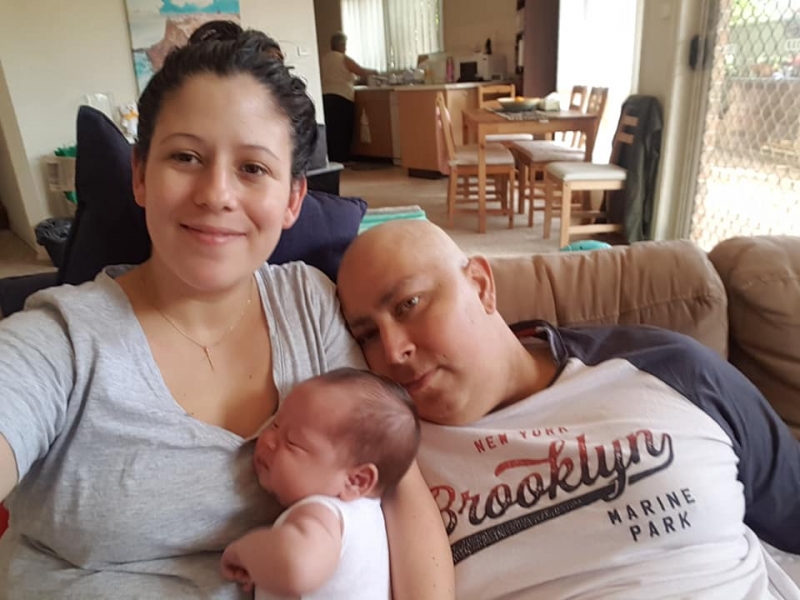 When Alexander Ruiz, a 34 year old from Gwynneville met Lisa Hansen at a mutual friends’ super bowl party, there was instantly a connection. They quickly fell head over heels for each other and nine months into their relationship they moved in together.

“I Knew Alex was the one for me when he took on my debt and created a joint personal loan with me after 14 months of dating. We used this joint account and deposited all our money together and he never complained how we shared our money. There was never a finger pointed of how much he or I were spending. We were always broke, living week by week and we always supported each other.” Said Lisa “When I decided on a career change Alex stood by me and supported our bills and rent working full time and I casual whilst I did a TAFE diploma and a University degree of Nursing. Alex loved that he was supporting me, and was proud of my success.”

Unfortunately their life was then turned upside down when Alex was diagnosed with Testicular Cancer in August 2017 (during the first week of Lisa’s last semester of University) Alex and Lisa played baseball for the Dapto Panthers, and after one particular game, Alex injured his knee and had to go to the doctor. Lisa had asked Alex previously to book an appointment to check out his swollen teste, so during his appointment, he asked the doctor to check out his teste as well as his knee. This doctor ordered an urgent Ultrasound of his pelvic region that morning. “As I came home from Uni, I found Alexander crying on the balcony of our Apartment. I asked what was wrong and how the Ultrasound went. Alex told me he had testicular cancer.” Said Lisa “I gave him a cuddle and said ok now what, what’s our next step? We chop it off right? When’s our appointment for the specialist?”

A week later early September 2017 Alex was in hospital for the first hospital admission, getting histeste removed; a procedure that took less than an hour. Alex was in recoveryand feeling 110%. Once the teste was removed, Alex wasmonitored for any cancer cells in his body. He had numerous scans of his chest,abdomen and pelvis and was given the all clear, with doctors monitoring him from September to December 2017.

Alex and Lisa were excited to move on with their lives, cancer free. While in her last semester of uni and having already lined up her full time position Lisa and Alex discovered they were pregnant!! A miracle baby wason its way! Only three months later Alex passed out at work dizzy with headaches and further scans found his cancer had spread to the brain in January

metastases are generally considered to possess a poor prognosis.

Alex endured treatment for this cancer, in and out of hospital many times, since April 2018-October 2018. Treatment included three different chemotherapy treatments and stem cell transplants. In January 2018, Alex had his first craniotomy, after growing two large tumours at the back of his
head. Four weeks later February 2018 he had another craniotomy the day before Lisa’s 32nd Birthday, that she spent by his side in hospital as he lay there recovering from the surgery. This craniotomy was the surgical area of his brain, which had picked up an infection, and they had to leave his bone out, meaning he lived with a large piece of skull missing from his head. Then only a few months later May 2018 he grew another tumour on his frontal lobe, requiring a third craniotomy on the front of his head. Alex was due to get his skull piece replaced once his body stabilized, but he never got the chance to replace the bone. These operations bought on seizures and required multiple hospital admissions for Alex, often for many weeks at a time.
Lisa was at his side wherever possible, pregnant and working full time, whilst also caring for Alex and trying to make ends meet.

While Alex was undergoing treatment, Lisa gave birth to their son Javier Alexander Ruiz in September 2018. This joy unfortunately was to be short-lived
as Alex’s condition rapidly worsened. During Alex’s ongoing treatment, Lisa and newborn Javier would travel daily from the Illawarra to Sydney to spend time with Alex, which also put a financial strain on the young couple.

Alex endured 6-7 rounds of chemotherapy to try and stop the cancer spreading, but it was to no avail. Unfortunately his intensive chemotherapy reaped havoc on Alex’s internal organs, and he suffered multiple organ failure impacting his liver, kidneys, heart and lungs. On November 3rd 2018, he
was admitted to Royal Prince Alfred hospital into the intensive care unit. This would be his longest stint in ICU, and this was unfortunately his last.

“Alex and I were always talking about marriage and we would have done it years ago but due to always being short of money as I was studying for a good 5 years, we never had the money. I wanted to go to town hall and sign the paper, Alex always said no, he wanted the big wedding,”Alex proposed at the bedside during treatments in Chris O’Brian life house hospital with his parents outside the door in May 2018. “We planned a big wedding at the beach or cliff side somewhere on the coast with Kombi vans as wedding cars once Alex got out of hospital and finished his last chemo session. This obviously didn’t happen as Alex didn’t make it out of hospital. I knew being a nurse and seeing his charts that Alex wasn’t coming home, so I asked the doctors and nurses if we could get a priest in to marry us at the bedside before Alex passed”, said Lisa.

On the 15th of December 2018, Alex and Lisa were married in the ICU unit at Royal Prince Alfred Hospital at Alex’s bedside with his parents and godparents and Lisa’s mother as witness. Alex passed away later that night, with his friends and family at his side, Lisa holding onto him as he took his last breath.

Friends and family of The Ruiz’s held a sold out Fundraiser at the Berkeley Sports Club to raise funds for Lisa and Javier, to help ease the financial burden of raising a child without his father. The same friends also submitted an application for funding and support to the Illawarra Community Foundation, who approved $5000 of food and fuel vouchers to assist the family which was presented to Lisa at the fundraiser

Donations were welcomed on the night a Go Fund Me page has also been established for donations. www.gofundme.com/AlexandLisaSupportandLoveCelebration

Testicular cancer is on the rise and can affect any male from infancy to the elderly. An estimated 9,310 will be diagnosed in 2018. Thehighest rates of diagnoses are males between the ages of 15 and 44. Largely dueto the lack of awareness & early detection it is estimated 400 deaths will occur in 2018. That’s 400 too many. More information on testicular cancer awarenessis available at www.testicularcancerawarenessfoundation.org

“I knew Alex on a personal level after working with him at Collegians many years ago,” said Convoy & Illawarra Community Foundation manager Mark Rigby. “He was a vibrant guy with an infectious personality, who always made you laugh and I am saddened by his passing. Hopefully the community rallies behind Lisa and Javier, and helps them through an extremely difficult time. We are proud to support Lisa and Javier with food and fuel vouchers, and hope Javier grows into a young man Alex would be proud of”