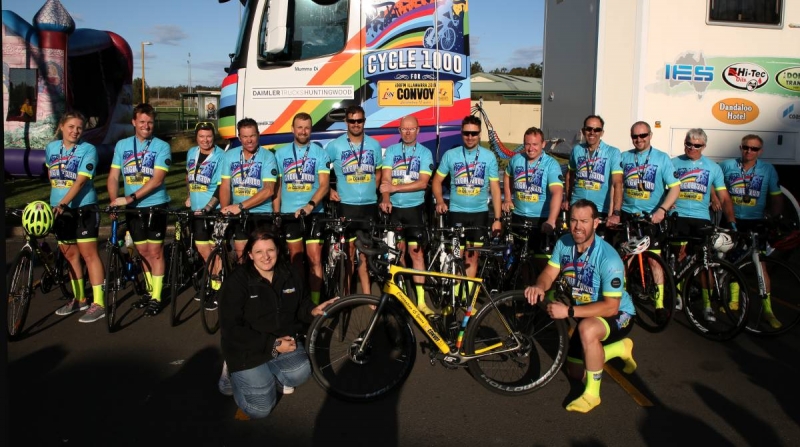 Just after 3pm the cyclists led by co-organiser Daniel Hotchkis pedalledinto the Dandaloo Hotel carpark to a heroes welcome as supportersformed a guard of honour for them to ride through. The final 150km leg of the long journey from Ballina was from Bella Vista in Sydney’s west.

Co-organiser Bianca Starcic summed it up when she said the 14 riders with seven support crew, two first aiders, three flat tyres, two grazed limbs and 32 sponsors had raised $59,099 for Illawarra families. During the inaugural Cycle 1000 in 2018 they had raised $44,103.35. “This is the second year we have done this now,” Ms Starcic said.“And if you add up last year’s money raised with this year’s total we have cracked $103,202 and 50 cents”.

All the money goes to the Dandaloo team’s leading truck bid in the i98fm Illawarra Convoy.

Mr Hotchkis said he felt excellent when he crossed the finish line on Sunday afternoon. But the last two days had been a real challenge.

“The first five days were fantastic but the last two the wind was absolutely terrible,” he said. “We had to peddle harder. But we were spurred on because we knew the local community always comes out and provides so much support which is great. It is hard to describe the reception we got when we rode in. When you finally make it home you always feel fine. But tomorrow might be another story”.

Mr Hotchkis said after such amazing support they will definitely be doing it again in 2020. Looking on a proud Convoy founder Marty Haynes, of i98fm, described what he saw as heartwarming and inspiring. “It is incredible to see the different things people are now doing,” Haynes said.

“You don’t have to have a truck or a motorbike to be part of Convoy. Recently we even saw a pigeon race”. “Then when you see what this team have done with the Cycle 1000 it is impressive and very inspirational when you think about what they went through to help other people.

:And that is what Convoy is about, helping others”. The i98fm breakfast announcer said when it started in 2005 the goal of Convoy was to raise $20,000. “Last year we raised $2million. And the great thing with the Illawarra Community Foundation is we actually keep the money in the region. So we help people who live in our community. I never thought it would get this big”.